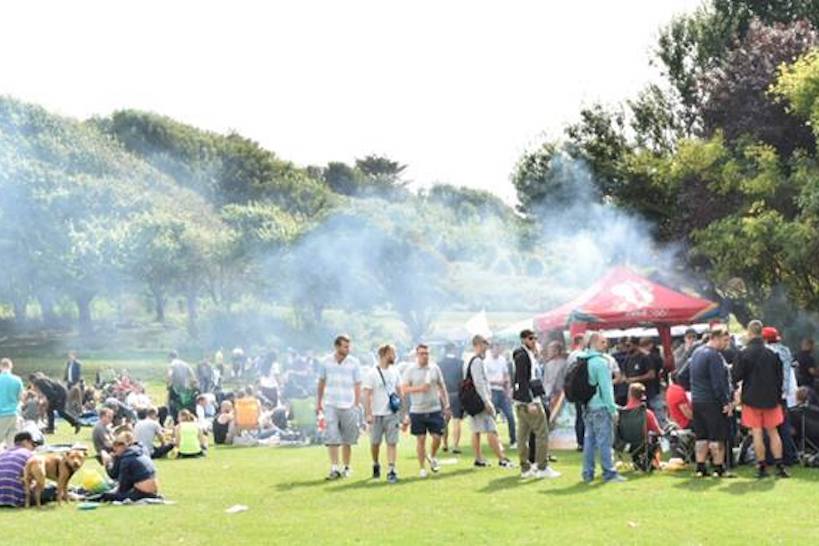 The summer season has taken a little while to get fully underway here in the United Kingdom, but the cannabis clubs and collectives of the UKCSC have taken full advantage of that and hosted events almost every weekend of the summer starting in April at 4/20 in major parks of London, Manchester and Leeds. Product Earth, Green Pride, CannaCampFest have been significant highlights of the year that have drawn in the local cannabis communities allowing the natural networking that is needed for us all to expand and grow to take place.

This August Bank Holiday weekend took no exception and was picked out as a day by Brighton Cannabis Club member @NugsofBeauty as a South Coast alternative to Notting Hill Carnival that was a little more chilled and a little bit more 420 orientated and friendly. It follows on from their BBQ last year in the same location at East Park which saw around 150 local tokers, patients and clubs converge for a bit of grilled food across the coals while sharing some of the local and personally grown flowers, edibles and extracts. This year saw the affair swell to numbers pushing the 700 mark throughout the day and enthusiasts travelling from as far as Newcastle such as the It’s Gold Up North crew who are a part of the Newcastle Cannabis Club, as you can tell, they came bearing gifts of dank. 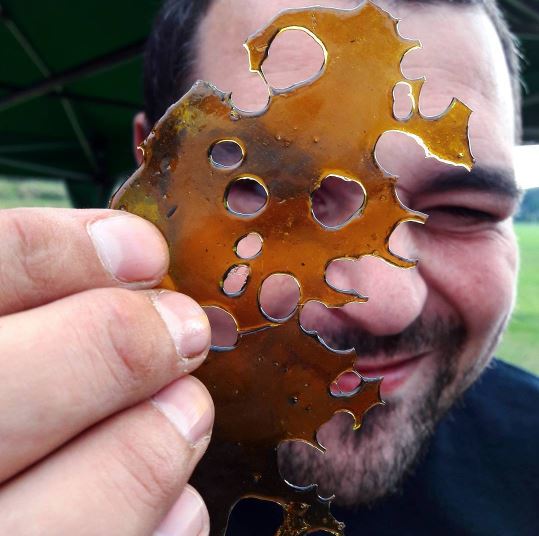 Setting up at midday London Smoking Club and East London Cannabis Club set up their headshop gazebos alongside Cummin Up a local Jerk and BBQ chef that knows how to spice up that sauce! Nannies’s Gourmet Edibles were pitched up in true style and were glowing after finding out they had just won 3rd place in the London Smoking Club’s Edibles Cup recently held. Brighton Cannabis Club and UKCSC were there signing up members to the club and are now over the 250 members mark. Hampshire Cannabis Club came along in high spirits spreading their “our life, our choice” message and Too Loud Smoking came to rep and dish out rolling papers a plenty to make sure we never stopped rolling. 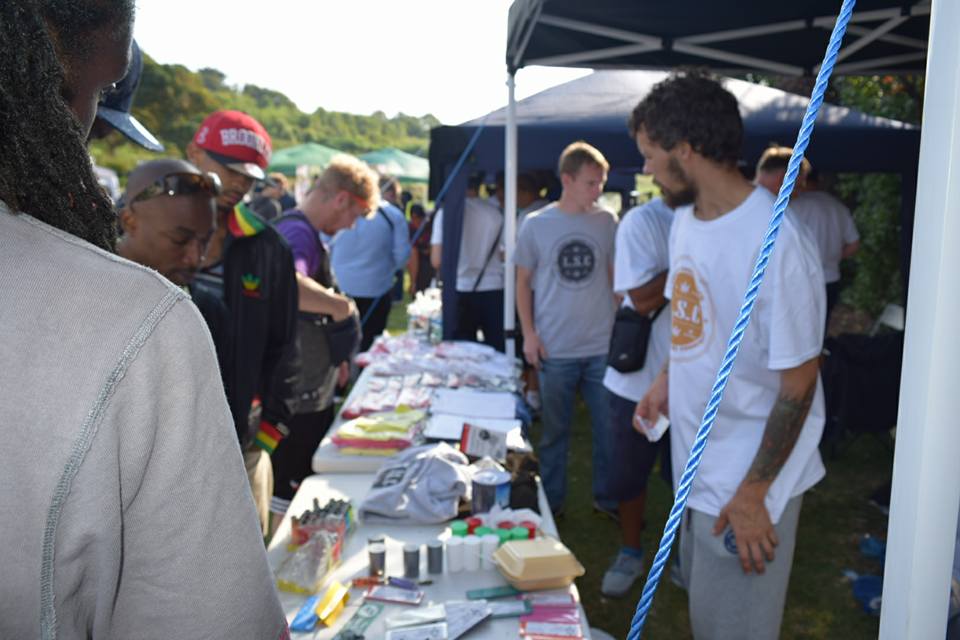 With 1pm being the official starting time there were already around 300 people sitting on the grass and on the banks of the park by 1:40pm…it seemed like we were going to have a busy turn out and we couldn’t have asked for a better day for it. Previously the park has been vacant but this year we shared the field with a group of families enjoying a game of cricket. Dressed in their white uniforms with families relaxing by the side of those competing it was quite an English affair. There was the odd comment about how unhealthy cannabis was coming from a cigarette smoking, wine glass holding lady who proceeded to take a sip but I thought “why ruin her day”.

It was the first time Sue, a Brightonian with Stage 4 lung and liver cancer had come to a cannabis event. She has been taking the oil for 10 months now but was told in January that she should get her affairs in order, the chemotherepy had failed to make an impact on her tumors, she was given 6 months. Now she is being stopped in the street and told how well she looks. “A younger woman stopped me in town recently and said, I don’t usually do this but, you look so lovely, where did you get your hair cut? Of course I had to tell her I had cancer, and she felt really bad and apologised. I just told her that she had given me the biggest confidence boost because I am meant to be dying”. And that’s generally the reaction she had through out the day – people amazed she looks so well and is so active, she ended up staying all day rather than the half an hour to see what it was like. “A year ago I probably would have agreed with the cricket wives over there, but really, what harm are people doing here – many of them are patients too when you talk to them.” 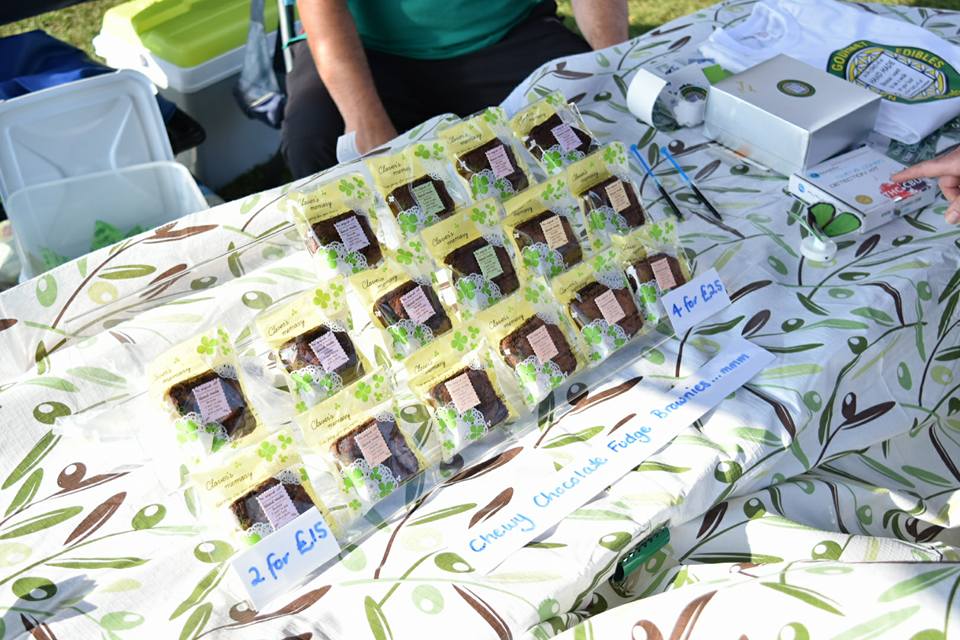 For the Brighton Cannabis Club this steady progress of taking membership and hosting regular ticketed meets means that the club has 250 like-minded local people as private members that are all coming together to invest their time, effort, ideas and some small change into making a safer and more accessible cannabis market for consenting adults. It’s a model that is working well and a number of clubs across the county and country have come to see and understand the format, take it back home and try to initiate the same process with your local community.

Speaking to Aggs, Vice Chairman of Brighton Cannabis Club he said ” You’ve just got to do it. If you want to see something happen to you locally you have got to just go for it. There may only be tn of you the first time but that’s OK because next time there will be twenty. But you have to carry on and keep pushing and it will happen.”

Within a year London Smoking Club have managed to grow their reach and spread their brand in a way that has let London smokers know there are regular local sessions and a group of people that are working towards creating a friendly and safe place for trusted private members to go and socialise in. It’s a process that takes time and risk due to the legal implications. But when you have such a large community of people (which is what these private members clubs show) they should not be ignored, and this is how we will eventually break down the walls of prohibition.

The concept of doing these events is safety in numbers. Clubs cannot set up and host events like this all by themselves. Working with the clubs in your county and even neighboring counties is vital and integral to the process. Having a set up for summer outside events is key and only costs a couple of hundred pounds all in for a gezebo, sturdy table and chairs. Micheal Fisher, Chairman of Teesside Cannabis Club and an organiser of CannaCampFest held the first weekend of August in Redcar compared the social situation between the events of the North and South, “There is a lot more unity down here, people just come and set up and make it about the event rather than trying to make the event about them. More clubs need to get organised so they can participate in these events, and then we will have more of these events”.

Tyler Green, founder of ISMOKE was also at the event raising cannabis awareness. ISMOKE has been keeping the cannabis community updated with local events and has been on a mission this year to spread the word about the clubs, with several articles and videos about how you can join your local cannabis social club.
“It’s great, a lot more people and a good vibe similar to green pride. You guys down in Brighton have the power to make a successful large event. I think we should be doing one every month like that”, Tyler said and he isn’t wrong or far off. UKCSC have hosted an event of some magnitude every week since April with the respective cities 4/20 events in London, Manchester and Leeds. This was followed by the Cardiff Global Cannabis March in May, Product Earth in June, Green Pride in July, CannaCampFest in August and Jerk and Fire tucking it all in nicely. It may seem a little further a field for us in England, Scotland and Wales but there is a growing scene emerging in Northern Ireland and Republic of Ireland respectively. September is looking like it’s going to be busy too with a Cannabis Summit in Dublin and the start of the UKCSC Autumn Awareness Town Tours coming to somewhere near you soon! 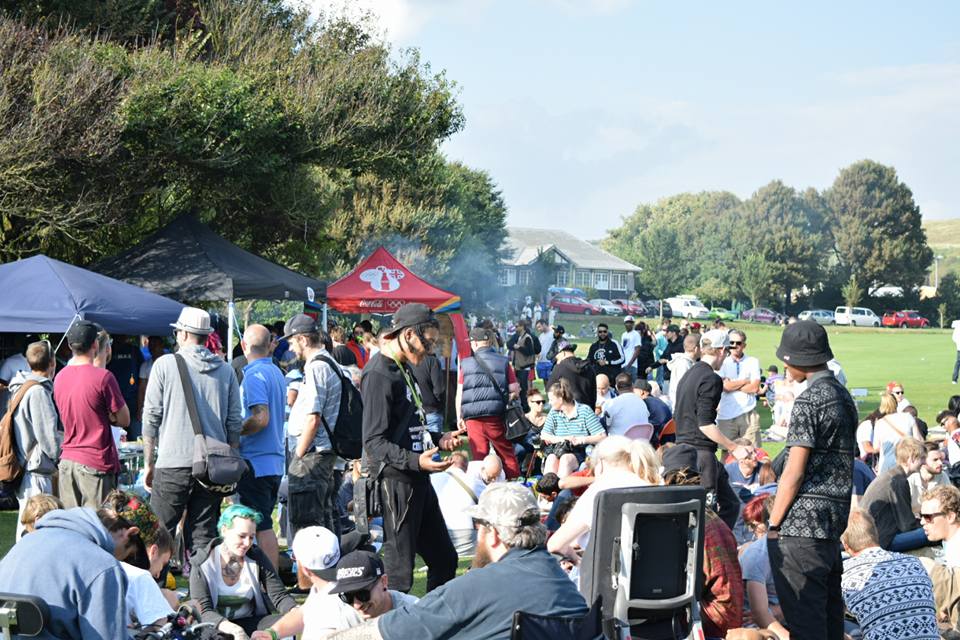 As it seems like summer is still wishing to carry on, the events calendar has been extended to September where we will see a few more congregations of a multitude of clubs possibly in some untouched areas, as well as some private gatherings for individual clubs to make use of the weather and also some private members ticketed events that if you are a member of the club, or another club in the UKCSC model, you can access invitations for. It’s all about being a friend or knowing someone which creates our community of trust.

This weekend also saw Bristol Cannabis Club and Hemel Hempstead Cannabis Club hold events of both kinds. Whilst Hemel Hempstead are just initiating their membership, Bristol have just signed up their 110th member at their local private members meets at a very appropriate and chilled venue. Stay tuned to read our report of their August Secret Session.

In November the UKCSC will be celebrating their 5 year anniversary, to mark the occasion we will be hosting our first official national AGM where the 50 clubs that have signed up to the UKCSC aims will meet to discuss the history, look over the present and discuss the future of UK Cannabis Social Club movement towards making the UK a safer place for cannabis consumers, cultivators and entrepreneurs. If you want you club to be part of the national conversation and contribute to the ideas and debate register your details with us and we will happily get in touch with you. 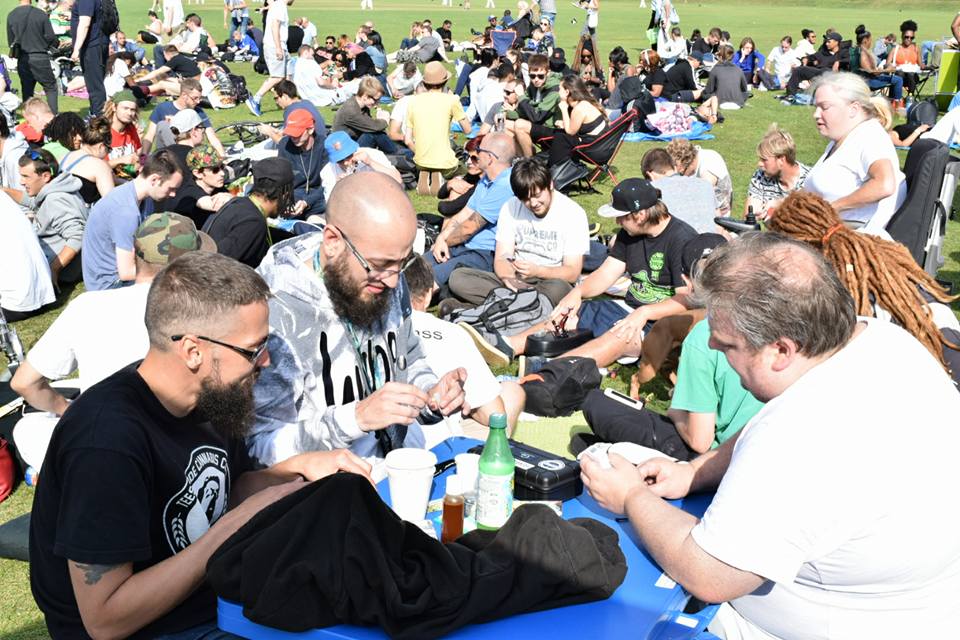 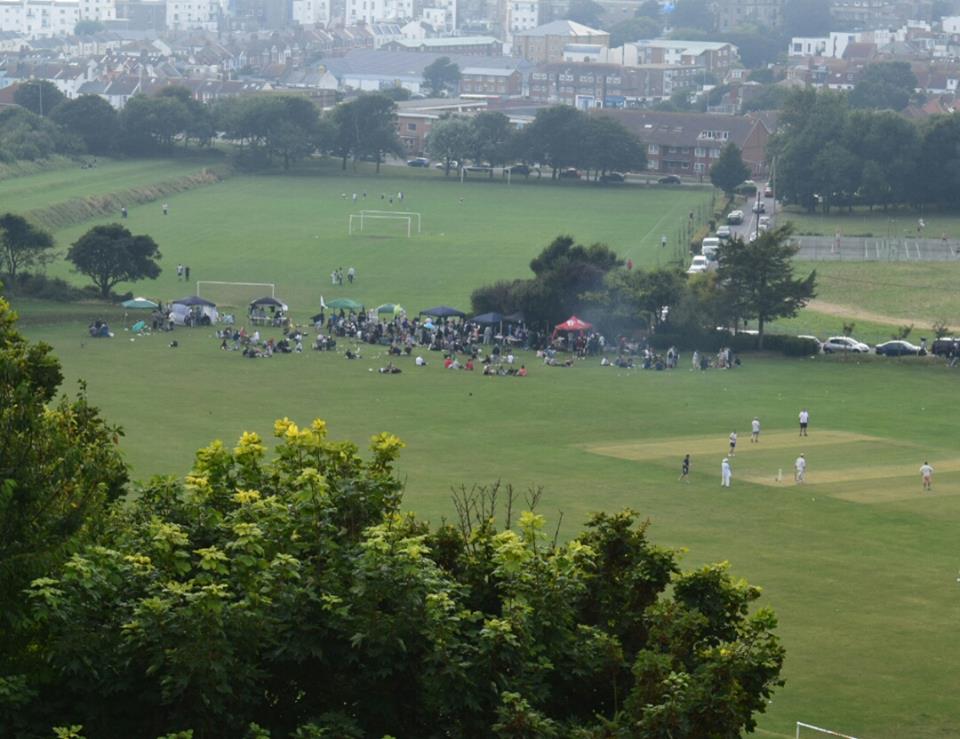 Thanks to Sy at Hampshire Cannabis Community for the photos! 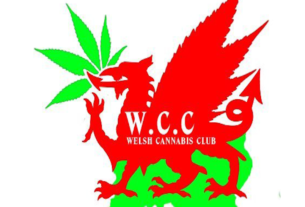 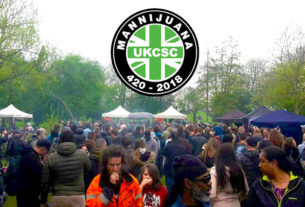 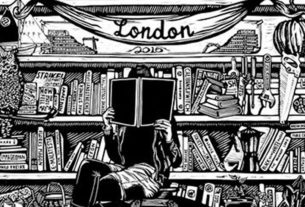 Anarchists Bookfair London: Can Cannabis Save The World?