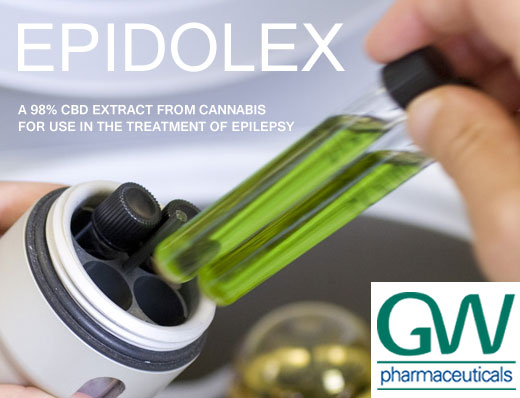 GW Pharmaceuticals; the company responsible for manufacturing Sativex, the cannabis extract in a spray bottle marketed for MS spasticity and neuropathic pain patients – have not tried to keep it a secret that they have been working on many other forms of cannabis preparation.

Just this year we have seen research published in the two very important fields of diabetes and cancer. Now after almost two years of anecdotal evidence constantly hitting the international headlines, the FDA in the US have allowed Phase II trials to see if GW’s second cannabis medicine, Epidolex is effective or not for childhood epilepsy syndromes.

The U.S.  Food and Drug Administration has approved clinical trials of a cannabis-based drug and its effects on epilepsy.  The treatment, Epidiolex, is 98 percent purified cannabidiol ( CBD ) made by GW Pharmaceuticals based out of the U.K.

There are around 60 known chemicals contained in cannabis called cannabinoids.  Tetrahydrocannabinol, also known as THC, is the main component responsible for the drug’s psychoactive nature.  CBD, however, is the second most abundant cannabinoid in the cannabis and provides medicinal benefits without the “high.” Epidiolex will come in a viscous liquid form to be dispensed from syringes.  A 25 milligram per meter or 100 milligram per meter will be the two strengths made available to those in the trials.

The FDA has approved of intermediate-sized clinical trials sponsored by two doctors.  Dr.  Orrin Devinsky, a professor in the Department of Neurology, Neuroscience and Psychiatry in the New York University School of Medicine and director of the NYU Comprehensive Epilepsy Center, and Dr.  Roberta Cilio, a pediatric neurologist at the University of California, San Francisco, are set to follow 25 patients using Epidiolex as treatment for pediatric epilepsy. [Mapinc.org] 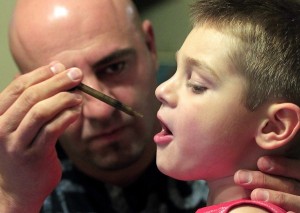 In a press release on November 15th , GW Pharmaceuticals refer to Dravet’s Syndrome as “a rare and severe form of infantile-onset, genetic, drug-resistant epilepsy syndrome”. Symptoms include clonic and clonic-tonic seizures and Grand Mal seizures that start early in the child’s life and are likely to continue multiple times daily (sometimes up to 300) for the rest of their lives. Trauma is caused to the brain from not just the violent seizures themselves, but from accidents that happen when the seizures strike – such as striking their head on the ground or an object. Speech and learning abilities are hindered.

There are around 5,440 patients in the US with Dravet’s Syndrome and 6,710 in Europe and approximately 1,500 in the UK, but it is believed that these figures are an underestimation as the disease often goes undiagnosed.

Epidolex, is a cannabis extract comprising of 98% purified CBD that is administered by syringe. The new drug initially dubbed GWP42006, is a non-psychoactive cannabinoid extracted from specific chemotypes of the cannabis plant which has shown the ability to treat seizures in pre-clinical models of epilepsy with significantly fewer side effects than currently approved anti-epileptic drugs.

In September when Phase I trials started Dr. Ben Whalley, Senior Lecturer in Pharmacology at the Reading School of Pharmacy, said, “Our research collaboration with GW over the last several years has shown that GWP42006 not only exerts significant anticonvulsant effects in a wide range of preclinical models of seizure and epilepsy but is also better tolerated compared to existing anti-epileptic drugs.” 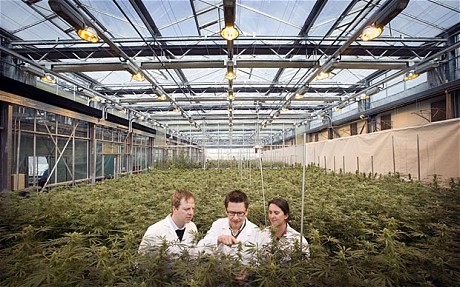 Epidolex has been designated as an orphan drug. This means that it has been designed specifically for this purpose and is able to be granted this status because Dravets and similar pediatric seizure disorders are orphan diseases meaning there is nothing currently available under a doctor’s prescription that works to suppress it. In both the US and the EU it is easier to gain marketing approval for orphan drugs and quite often they come with periods of exclusivity – something GW Pharmaceuticals are used to. Indeed the US Orphan Drug Act 1983 specifies that companies designing medicine for illnesses that 200,000 or less people are affected, have seven years exclusivity to treating the illness and will receive clinical trial tax incentives.

Epilepsy affects 50 million people worldwide and up to 30% of patients do not respond to available treatments while a vast majority of medications leave side effects that effect cognition, movement, memory and mood and reduce quality of life. CBD is being used to treat all of these as well as not causing them.

Dr. Ben Whalley continues, “It is also noteworthy that GWP42006 appears to employ a different mechanism of action to currently available anti-epileptic treatments. Together, these findings fully support the exciting clinical development that is now under way and represent an important step towards a more effective and better tolerated treatment for epilepsy.”

As well as Phase II trials commencing sometime in early 2014, the FDA have approved seven expanded access IND’s (Investigational New Drug),  extended previously from three to give US clinicians the go ahead to start treating immediately patients suffering with Dravet syndrome, Lennox-Gastaut syndrome, and other pediatric epilepsy syndromes.

This is undoubtedly great and life changing news for not just the children whose lives are going to be improved but will have a dramatic effect on their families. Caring for a child that has such a chronic, debilitating and unpredictable condition is not an easy task at all. Thanks to certain states in America that have voted for Medical Marijuana exemptions, this access has been sped up and is what has forced the FDA and Federal Government to start allowing clinical trials to start taking place – and why they are essentially fast tracking some patients.

Recently there has been an overwhelming surge from parents searching to find CBD rich cannabis oil to treat their children – even resulting in moving states half way across the country or relying on family in medical marijuana states to help provide the medicine through the back door. This is likely to be a cause of concern for any government – nobody wants patients being exploited and sold medicine that is;

a) not what it says it is in terms of active ingredients – in this case the ratio of THC:CBD which dramatically changes the effects of the medication, the symptoms and also causes concern about side effects like getting high off too much THC;

b) there needs to be assurance that there are no contaminants in the medicine that could alter the effect of the medication or be toxic and cause harm to the patient.

Certainly when we are talking about children as the patients we do not want charlatans exploiting desperate parents for large sums of money for a treatment that is still against the law, has no guarantee and no one to complain to if something went horribly wrong. Anyone can make cannabis oil at home so making sure that it is pure from any solvent used in the extraction process is vital – and dangerous if ingested without being done thoroughly enough.  The FDAs use of INDs is probably an attempt to try and halt the rush to non-authorised sources. In Colorado this June there were 35 patients under 18, now there are 60.

“This is just the tip of the iceberg,” Dr. Margaret Gedde, a Colorado Springs pathologist who has recommended children for medical marijuana, told The Gazette. “People will continue to come because it works. Patients are seeing between 50 and 90 percent reduction in seizures with no side effects. That’s amazing.”

Certainly, Dr.Stephen Wright, Director of Research and Development at GW. Agrees “We believe that [Epidolex] has the potential to become an important advance in the treatment of epilepsy, a condition for which there remains a substantial unmet medical need.”

See The Face of Cannabis website just to see how effective cannabis is for pediatric conditions and ask why we have been criminalising and preventing patients from having safe access as a medicine for the last 50+ years.

In 2011 the world was introduced to Jayden, a four year old boy from California that lived with his dad Jason. They had tried every synthetic drug on the market but Jayden’s 300 seizures a day were just not stopping. Eventually after talking to a new doctor, Jason was advised to try a high CBD tincture.

The first dose of CBD was administered on Weed Wards the Discovery Channel documentary series. Jayden had his first four full days seizure free after having them every day since Christmas day as a four month old. Eventually he started to be able to hum and it was not long before he started speaking and was able to say “I love you daddy”, something Jason had never heard from his son before. He is now learning and making fantastic progress as a human being not trapped in a dark seizure world.

In Colorado the six Stanley brothers Joel, Jesse, Jon, Jordan, Jared and Josh started Realm of Caring to help people in need. They resented the stigma that was associated with cannabis and wanted to set about to change that. They entered into breeding programs and eventually found a high CBD variety that did not give patients a high but still provided good medical relief. They called it Charlottes Web for good reason and it tested at 0.5 percent THC and 17 percent CBD.

Charlotte Figi was in need of a treatment. At 3 months old she started having clonic-tonic and grand mal seizures. At 5 years old her seizures got to their worst and the doctors asked the parents to sign a do not resuscitate order after her mother already had to 3 times with CPR. Eventually Page her mother, contacted the brothers and after some reservations about her age started treatment. Charlottes’ seizures went from 1 every 25 minutes (400 a week) to 0-1 a week with immediate effect after the first dosage and was able to come off 100% of the cocktail of pharmaceuticals. The Realm of Caring now treats 40 child patients with over 1000 families waiting for treatment.

CNNs Sanjay Gupta starts an investigative documentary TV show on the medical marijuana states and features Charlotte and her story on the show “Weed”. Gupta came out and said “I was wrong about marijuana” and this gave the show a huge following which helped spread the story far and wide about Charlotte and how cannabis has saved her life.

Families from all over America are trying to gain access to high CBD medicine from providers like the Realm of Caring. 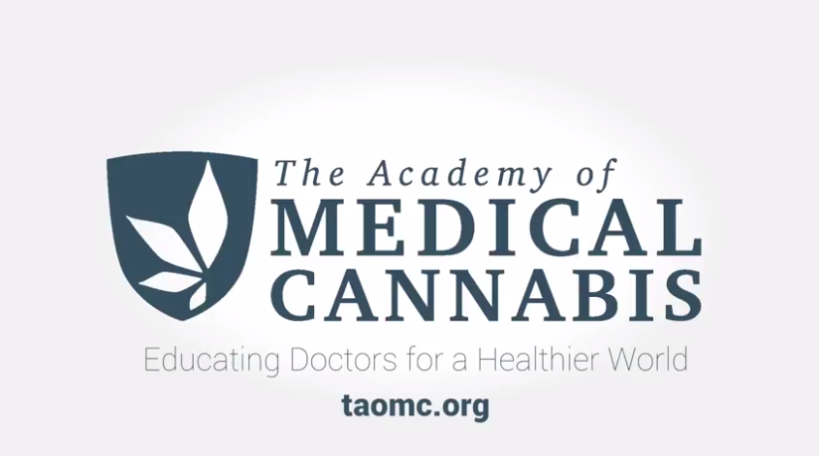 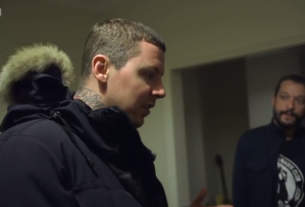 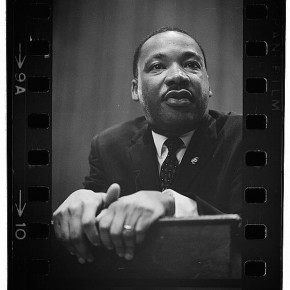 We Have A Dream